Wilfric the farm hand is/was the younger brother of Alfric, who was a loyal sergeant serving under C. Wilfric fled and hid during the battle of Trademeet, only to return to find his brother dead and the town now very unfriendly. He gathered up a few friends among the survivors of the battle and set off in search of a new destiny.

Subsequently, Wilfric was spotted by the Wildward following the party around Fairhaven. Although he had disobeyed orders to do it, Wilfric claimed to discover that Reglor was reporting on the party’s activities to several suspicious-looking individuals. C admonished Wilfric, and now Wilfric is tasked with finding some way to reestablish trust with C before they meet again at the Porcelain Pussycat on the morrow. 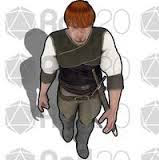