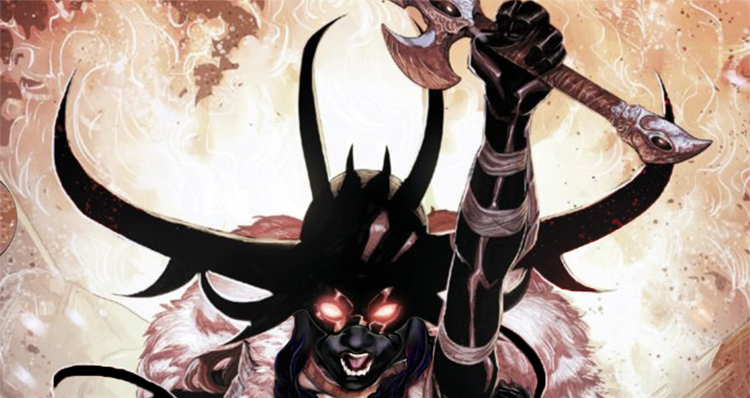 Light is the left hand of darkness
and darkness the right hand of light.
Two are one, life and death, lying
together like lovers in kemmer,
like hands joined together,
like the end and the way.

Nyx is a seductive, left-handed dark elf. Her pale red eyes have no pupils and her hair is a wavy, dark blue-black — unusual for her kind. She smells of fragrant sparks and her nails are painted purple. An inveterate, unabashed sadomasochist, her favorite damage types are Piercing, Necrotic, Poison, Psychic, Force, and Cold. She enjoys receiving pain (of all types) as much, if not more, than dealing it. 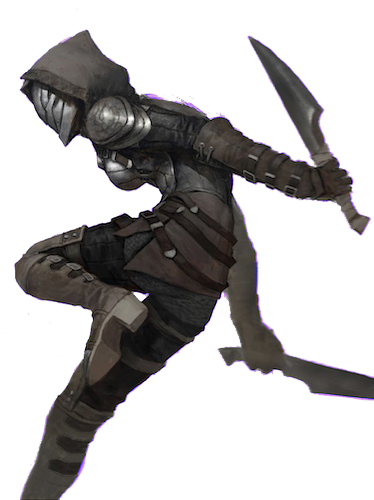 She wears a close-fitting black chain shirt and hooded black cloak. In daylight, and well-lit chambers, she puts on circular sunglasses. Her short swords “Snuffles” and “Scratchy” hang from crossed chain belts at her hips. Her buckled, knee-high soft black boots have pointed toes, and thin chains circle her thighs and upper arms. A black, eight-sided crystal hangs from a chain around her neck. The crystal vertically impales a silver skull fitting: 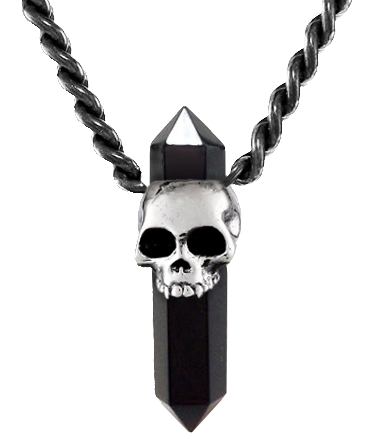 Despite her uncommon dark elven appearance, Nyx’s experience as a spy allows her to fit into most settings: private, public, urban, rural, high class and lowbrow. She quickly disarms prejudice and is a keen student of body language. While she’s more in her element in the city, she lets her hair down in halfling villages and enjoys wilderness journeys— as long as it’s in the dark.

Nyx’s Otherworldly Patron gave her an invisible friend named Ernest Gary Gygax, who moves objects, distracts her enemies, and performs espionage, reconnaissance, and communication for her. Her patron also awakened her ability to hear thoughts and speak without making a sound. Like her familiar, Nyx tends to vanish without warning.

She’s very generous with her allies, but her temper is short and fierce if she— or any woman she hears of— feels demeaned or slighted. Nyx is a thrill seeker who delights in mischief, but she has the patience of a mature elf. Her designs are focused on the long game, always willing to make a temporary sacrifice for a long-term advantage.

Her conscience, loyalty and compassion were once deeply repressed, but her recent discovery of true love has changed this. Nyx is a spendthrift, but usually turns this towards pragmatic ends. She focuses on resources, stratagems, and power structures, believing the pen is mightier than the sword. She’s an ambitious businesswoman, a hard negotiator and a seducer— something that gets her into trouble… 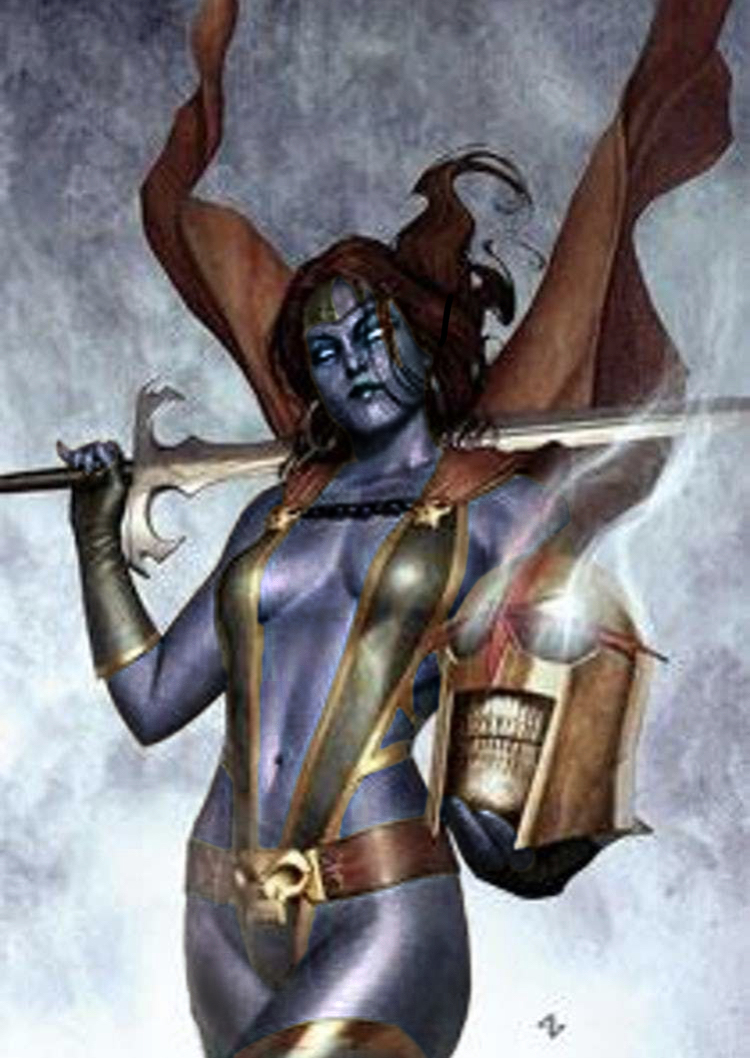 Fifteen years ago, under a starless New Moon, Nyx emerged from the crater of a dormant volcano. She was naked and alone, 85 years-old but with no memories of her life before that night. At the edge of the smoking crevasse, she discovered the blackened skeletal corpse of a woman in a dark robe. The face was recently burned away, but it seemed to Nyx that the woman had died smiling. A dark crystal hung from her neck on a chain. Nyx took it— her first possession in this world — and the woman’s blackened skull. It was the Winter Solstice of Frostbite 23, Nyx’s “birthday.”

After wandering the wilderness for three years, a harsh winter overcame her meager survival skills in the Stagg Hills, and she was forced to take refuge with the Cult of Morkano. Her relationship with the Cult’s fanaticism has always been one of convenience, and she secretly hated the patriarchy of Morkano and his Cult’s hierarchy. A few years later the Cult deployed her as a spy, informant, blackmailer and burglar in Fairhaven.

Despite her amnesia, she knew things she never learned from the Cult: bits of arcana and idioms; Drow spells and swordfighting techniques. She could read and write Elvish when she emerged, and she spoke it with a thick Drow accent and dialect. In the library of the Menkanende, she learned to speak and write Common with such speed that the cultists felt she must’ve had some prior exposure…  if so, she has no memory of it. In the Menkanende library, she became obsessed with studying legendary female occult figures and fiends.

Just over a year ago, she removed a loose stone in the floor of her trancing cell at the bottom of the Menkanende, revealing a complex of ruins deep down where no surface dweller could ever hope to find. There she discovered a hidden altar to a long-forgotten entity. At its foot she found an ebony and pearl box with a mithril clasp. Its empty interior was carved with a recessed depression that precisely fit her black crystal. The box had been custom made for it.

At the altar, the entity spoke to Nyx through her crystal. She welcomed his dark embrace and flattered him, and to her delight, he awakened her mind, offering patronage from the netherworld in return for her allegiance. She could tell the entity was a male, once strong but now banished and weak. Perfect!

The Cult always held Nyx at arm’s length, perhaps because they sensed her contempt. Twelve years of suspicion in both directions have poisoned the waters of their alliance. Her final mission for the Cult was to spy on Pemming Gildshine, but she chose instead to forge an alliance of mutual cooperation with him and break away from the Cult.

Nyx plays coy to cover for not knowing who she really is. She has openly admitted that she’s more comfortable with deception than honesty, but she’s been working on that. Before she met the Patrons of Fairhaven and Brynne Simons , Nyx wondered if her entire persona was constructed as a kind of self-deception. To some extent, this was true, and the Patrons of Fairhaven and Brynne have helped Nyx begin to unravel who she really is.

Nyx is forever grateful to the Patrons of Fairhaven for leading her to meet Brynne Simons in the Royal Library of Fairhaven. While they robbed the library, they became lovers, and Brynne became Nyx’s apprentice, protégé and confidant. The purity of Brynne’s devotion inspired Nyx to unlock her repressed conscience, loyalty and compassion. Nyx considers Brynne to be her soul mate, and she plans a future of coequal partnership to raise Nyx’s and Graz’zt’s unborn lovechild. 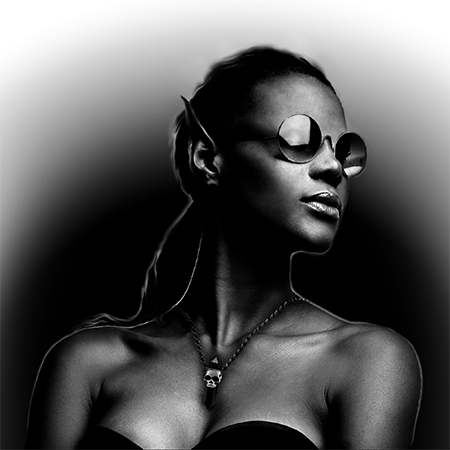 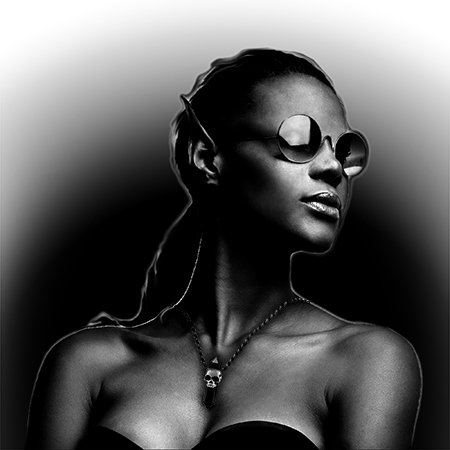