Father Bilwill Gildshine is a middle-aged gnome of lean stature, but with a pronounced paunch jutting out from the center of his frame. His keen, bright eyes peer down the length of his thin nose. Patchy, chaotic whiskers only partially conceal the well-worn laugh lines near his mouth, which seem to spread up is nose and around his eyes as he greets you with a ragged, toothy smile.

Gildshine’s generally tends toward capriciousness and mischievousness. He cracks easy jokes and carries himself in only a semi-serious way (even in the most sober, grim times). He possesses the robust appetites expected of the clergy of Gwalto: lusty, boozing, and generally greedy towards material consumption.

Bilwill asserts that he and several other clerics of Gwalto have discovered that the temple leadership is in league with a secret cult of Morkano. Concerned about such associations, Bilwill seeks to establish alliances with other powerful groups in the city, including, potentially, the clerics of Aearmo. Bilwill sees the formation of his son Pemming’s party as a way to unite such powerful groups around a common goal. The inclusion of C and Berouwvol in the party please Bilwill greatly. 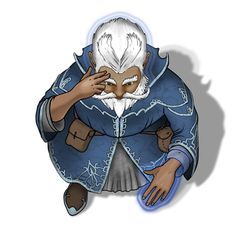